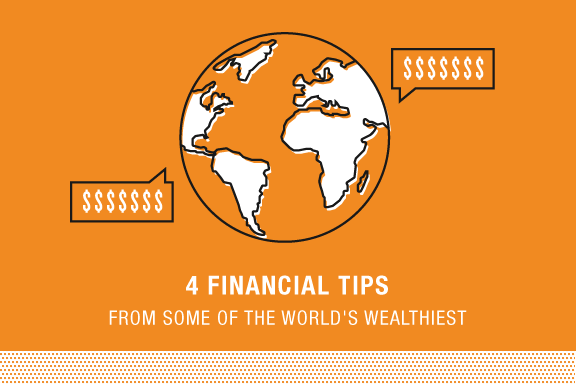 4 Financial Tips from Some of the World’s Wealthiest

When it comes to financial advice, it’s always a good idea to listen to the experts. Sure, your social media friends and your oddball brother-in-law always seem to have something to say about managing money, but this is an area best left to those who have been there, done that. Here are 4 financial tips from some of the world’s wealthiest.

Warren Buffett is among the wealthiest people on planet earth. And yet you wouldn’t know it by the way he spends his money. Simply put, Buffett chooses to live simply. He resides in the same home he bought in 1958 for $31,500. He refuses to incorporate expensive technology, toys, and luxury cars into his everyday life, and he lives far below his financial means. But, why is Buffett so frugal? Because living simply is the most fundamental part of his success. Above all else, Buffet’s first financial rule is not to lose money. And, limiting unnecessary expenses is an easy way to keep your hard-earned wealth where it belongs.

Bill Gates, co-founder of Microsoft and one of the richest people on the planet, credits his failures for his successes. “Success is a lousy teacher,” he said. “It seduces smart people into thinking they can’t lose.” At a young age, Gates dropped out of college and founded a fledgling tech business, which eventually failed. The experience, though painful, helped Gates learn important lessons that helped him create Microsoft. Instead of giving up, Gates learned from his failures and vowed to be better the next time. “Once you embrace unpleasant news not as a negative but as evidence of a need for change, you aren’t defeated by it,” Gates said. “You’re learning from it. It’s all about how you approach failures.”

Currently the wealthiest person in the world, Jeff Bezos, founder of Amazon, understands the value of making quick decisions and then course correcting in the event they’re wrong. In a letter to Amazon shareholders, Bezos wrote, “Most decisions should probably be made with somewhere around 70% of the information you wish you had. If you wait for 90%, in most cases, you’re probably being too slow. Plus, either way, you need to be good at quickly recognizing and correcting bad decisions.”

Being unafraid to dive into a decision, even without all the information, and then “failing fast” in the event the decision takes you too far off course, is the formula for success that Bezos and many other of the world’s wealthiest have followed. The fundamental truth behind this formula is to get started and then be willing to adapt down the road.

Oprah is a strong believer in belief. If you’ve followed her career, you know that she was born into poverty and became a self-made billionaire with the highest-rated television talk show in history. Her focus on self-improvement and philanthropy resonates with her millions of fans and it all started with a little faith in her capabilities. “You become what you believe,” she said. “You are where you are today in your life based on everything you have believed.”

As it relates to financial advice, Oprah’s advice rings true, especially when it comes to accumulating wealth. Find your passion in life, believe in yourself, and go make a difference in the world. Money is simply a byproduct of doing what you love to do. And financial security comes naturally from pursuing your passions.